Dash Kameku, Mara Senten, and the crew of The Lucky Strike II find themselves embroiled in adventures during a galactic cold war in the Silver Spiral Galaxy.
Genres: ActionAdventureSci-Fi

Cosmic Dash follows the adventures of Dash Kameku, Mara Senten, and the rest of the crew of the Lucky Strike II, an experimental research and development ship under the service of GalactiCorp. The crew travels the galaxy from the populate known regions to the mysterious and dangerous wild space.

Three factions are driven to colonial expansion, engaged in a galactic cold war that is only heating up more and more and the crew of the Lucky Strike II increasingly find themselves thrust into the center of the galactic-stage.

The story is explored through the webcomic in addition to short stories and lore. 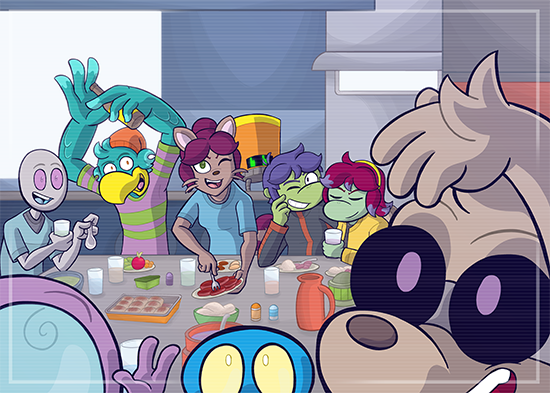 ...
Comicadia ©2017- Cadence the faun, the Comicadia Logo and the the Comicadia Pan Flute icon are all © of Comicadia. All other images, characters and icons are © of their respective owners and are used with their express permission for this site. · Site Design by MonicaNG