hpkomics.com - the work of hpkomic

Are you creative? Under the Ink hosts this forum to discuss and share all aspects of webcomicdom and creative projects.

Share art, resources, or general discussions on drawing, writing, or even making videos and podcasts!

Don't forget to set up your own FaunCon booth - it's like a mini Comic-Con or DIY Fair!
Forum rules
Please keep posts on topic to creative works outside of Comicadia or Comicadia's projects.
Post Reply
3 posts • Page 1 of 1

hpkomics.com - the work of hpkomic

About Me
Hello, it seems you have stumbled into my trap- er - booth! My name is David Davis, normally known online as hpkomic, and this is my FaunCon booth to convince you to check out all the stuff I've made. I live in Southern California and I am an administrator of Comicadia you can probably blame a lot on. You can find me on all the social media stuff, like Twitter, Facebook, Instagram, etc.

I grew up loving comics, cartoons, videogames, and all that typical stuff. Most of all I loved reading, which has lead me down the current path to being a teacher. Besides that, of course, I am creating comics and stories constantly and have any number of projects going at the same time. Below I am going to talk about some of my current projects, and in the next post you can find my commission information.

Cosmic Dash is my primary webcomic. Here's the elevator pitch:

Cosmic Dash deals with a massive galaxy called the Silver Spiral that is being explored by many different alien races and three principal factions. The comic focuses on Dash Kameku and his crew-mates as they transport cargo around the known galactic territories and beyond. The comic is an episodic space-adventure that updates on Saturdays.

Cosmic Dash Stands out as a webcomic, I think, for a few reasons. First of all, it is absurdly ambitious. Did you know that the whole project includes the weekly webcomic, mini-comics, short stories, a novel, and even two spinoffs? You didn't? Well, why don't I talk about all these things then?

The weekly webcomic is accompanied by a collection of short stories that flesh out the world surrounding the characters. I sell many of these on Gumroad for $1 - $2 a collection. The novel was a couple hundred pages as well, and is also available for a couple bucks on Gumroad.

The two Cosmic Dash spinoffs are Galactic Hub Serreven and Nightlifers. Galactic Hub Serreven is a series of short, episodic light novels that follow the brother of one of the major comic characters as he runs a major space station. Nightlifers follows a group of aliens associated with a noodle restaurant at the Imperial capital, and is written by Deft Beck.

RGBots is another comic I am responsible for as the lead editor and designer. It is a jam comic featuring anonymous writers are repeated art assets. It is definitely NSFW due to language. RGBots updates three times a week on Mondays, Wednesdays, and Fridays. You can also subscribe of Webtoon and Tapas, though those archives are far behind, though they update three times a week as well.

We have a fun little feature on the site where you can e-mail the robots a question and they will answer them in comic-form as updates. This is a great way to get some promotion for your own stuff.

RGBots also has a spinoff called Public Domain Webcomic. Fans of Mystery Science Theater 3000 are going to love it. The comic updates on Tuesdays and Thursdays.

DARK LENS LOGO HERE.
Dark Lens is an episodic, player-driven Lovecraftian horror story I am developing for my Master's Thesis at CSUSM. The story is constructed in Twine and choices readers make are recorded to a database which I use to track trends in readership, tailoring the narrative based on how readers respond to the text. Dark Lens' schedule is a little more variable, but it should update every two weeks or so.

Re: hpkomics.com - the work of hpkomic

Commission Info
Please note that patrons get 30% off of their commissions. 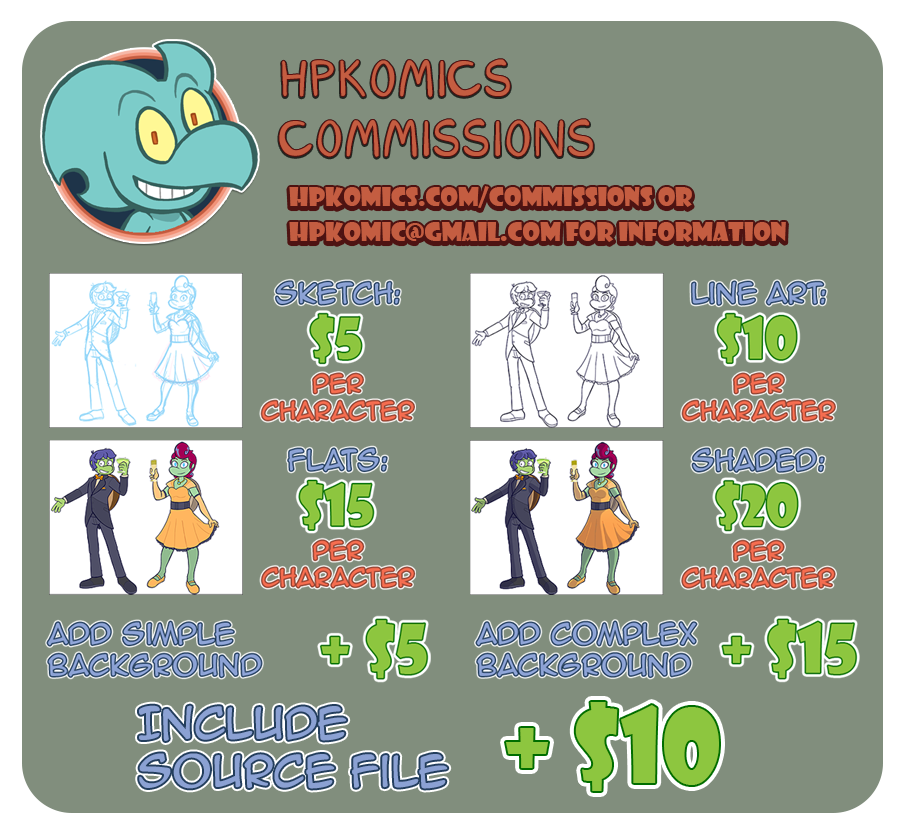 Re: hpkomics.com - the work of hpkomic

Hey everyone! I'm going to start streaming regularly again. Right now I am looking at Friday nights and potentially Saturdays as well. What would you like to see?

Return to “Under the Ink”

Check back for new features!